In some parts of Mumbai today BDD chawls are famous mostly in the area of Lower Parel. So what is the word BDD means? BDD is “Bombay Development Department”. BDD was established in 1920 and was responsible for providing more land for housing and constructing for 50,000 tenements on reclaimed lands.

BDD were responsible for various project. Following are their significant achievements:

During 1947 there was mass influx of people various rural places of India. This was threat to the management of the city. So BDD devised “The Master Plan For Bombay”. The plan was intended to aid sanitation problems, alleviate industrial development and relieve traffic congestion. The BDD undertook massive housing schemes in the city what is now known as BDD chawls and also reclamation at Backbay. 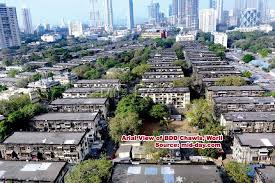 Out of the 195 BDD chawls, the maximum of 121 chawls are in Worli. In all, there are 16203 tenements of which 2901 tenements have been earmarked for police housing.

The Worst Epidemic Of the City in 1896

The Worst Epidemic Of the City in 1896